Life, in Spite of Me 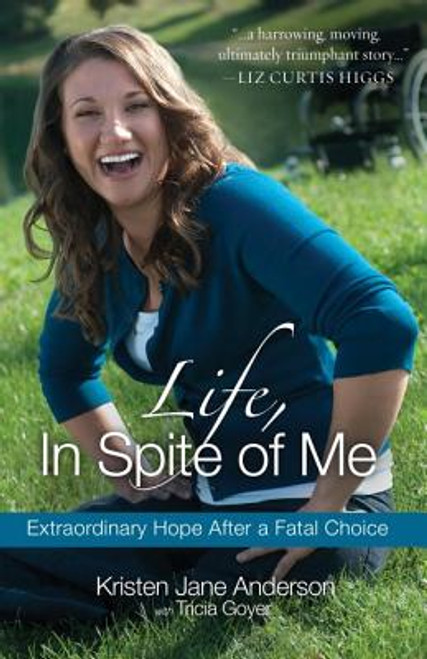 Life, in Spite of Me

She wanted to die. God had other plans.

Overwhelmed by wave after wave of emotional trauma, Kristen Anderson no longer wanted to live. One January night, determined to end her pain once and for all, the seventeen-year-old lay across train tracks not far from her home and waited to die.

Instead of peace, she found herself immersed in a whole new nightmare.

Before the engineer could bring the train to a stop, thirty-three freight cars passed over her at fifty-five miles per hour. After the train stopped and Kristen realized she was still alive, she looked around and saw her legs ten feet away.

Surviving her suicide attempt but losing her legs launched Kristen into an even deeper battle with depression and suicidal thoughts, as well as unrelenting physical pain all from the seat of a wheelchair. But in the midst of her darkest days, Kristen discovered the way to real life and a purpose for living.

For anyone struggling to find the strength to go on, the message of this heart-wrenching yet hope-building book is a clear and extraordinary reminder that even when we give up on life, God doesn't give up on us.

"Includes notes of encouragement from Kristen and resources for suicide prevention."

Connecting as a Couple Despite Your Differences (Digital)

Thriving Despite a Difficult Marriage

Loving My Actual Life: An Experiment in Relishing What's Right in Front of Me

Finding Respite for Families in Adoption and Foster Care

Standing in the Shadow

Surviving Suicide Loss: Making Your Way Beyond the Ruins

Between Life and Death: A Gospel-Centered Guide to End-Of-Life Medical Care