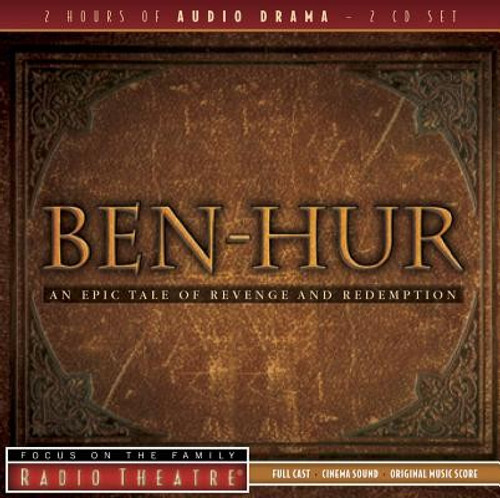 An unforgettable account of betrayal, revenge, redemption, Focus on the Family Radio Theatre's production of Ben-Hur tells the tale of a nobleman who fell from Roman favor and was sentenced to live as a slave - all at the hands of his childhood friend, Messala. Once nearly brothers, any hope of reconciliation is dashed after Messala is seriously injured during a vicious chariot race won by the vindictive Ben-Hur. But what makes this adaptation of Lew Wallace's best-selling story unforgettable is the changed man Ben-Hur becomes after seeing Christ on the cross. Recorded in London with film-style sound, this action-packed production shares that compassion is the true path to redemption.

What is Radio Theatre? Radio Theatre is the bridge between film and audio books in the format of a dramatized, purely acoustic performance. It is an immersive experience for listeners to imagine the characters and the story through dialogue, music and sound effects. Unmatched, Focus on the Family?s Radio Theatre is award winning with performances from internationally acclaimed actors. More than an audio book, it is a movie that plays on the biggest screen of all... your imagination.