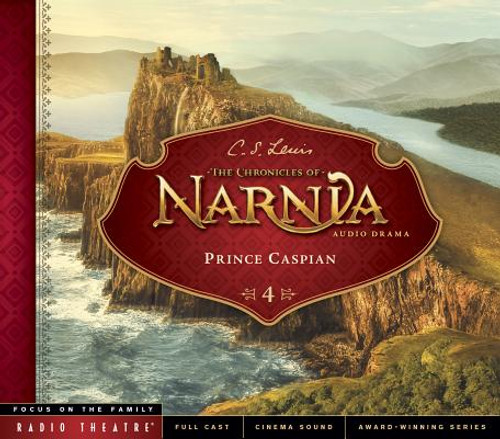 Peter, Lucy, Susan, Edmund--and the magnificent lion, Aslan--are back in this thrilling dramatization of Prince Caspian, which begins when a young prince learns the truth of his father's murder. A ragtag army rallies to restore the throne to their rightful king as the four strangers from another world are thrown into the war. Featuring talented voice actors, film-style sound design, and a rich musical score, this story puts honor, loyalty, and truth to the test in a battle for the future of Narnia.

Fully dramatized and produced with cinema-quality sound design and music, Prince Caspian is the fourth of seven audio dramas in the Focus on the Family Radio Theatre production of The Chronicles of Narnia. Hosted by Douglas Gresham, stepson of C. S. Lewis, and recorded in London, these timeless adventures are brought to life by a cast of talented actors, including award-winners Paul Scofield and David Suchet.

This is a repackaged, individual title from the bestselling Radio Theatre series The Chronicles of Narnia, which has sold more than 950,000 copies.

Radio Theatre: The Horse and His Boy