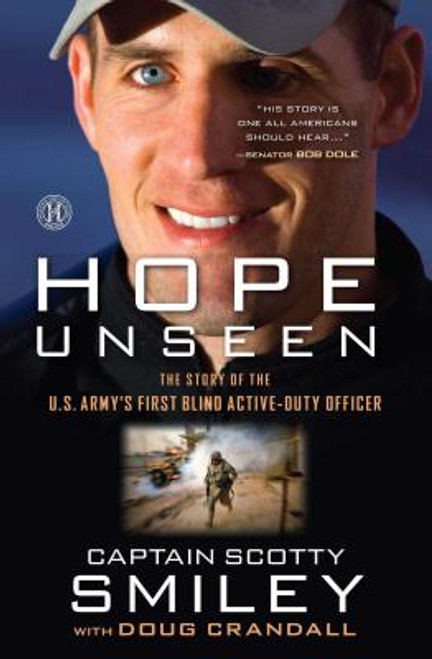 Hope Unseen challenges readers to question their doubts, not their beliefs, and depend upon God no matter what--the inspiring true story of "blind" faith.
A nervous glance from a man in a parked car. Muted instincts from a soldier on patrol. Violent destruction followed by total darkness. Two weeks later, Scotty Smiley woke up in Walter Reed Army Medical Center, helpless . . . and blind.
Blindness became Scotty's journey of supreme testing. As he lay helpless in the hospital, Captain Smiley resented the theft of his dreams--becoming a CEO, a Delta Force operator, or a four-star general.
With his wife Tiffany's love and the support of his family and friends, Scotty was transformed--the injury only intensifying his indomitable spirit. Since the moment he jumped out of a hospital bed and forced his way through nurses and cords to take a simple shower, Captain Scotty Smiley has climbed Mount Rainier, won an ESPY as Best Outdoor Athlete, surfed, skydived, become a father, earned an MBA from Duke, taught leadership at West Point, commanded an army company, and won the MacArthur Leadership Award.
Scotty and Tiffany Smiley have lived out a faith so real that it will inspire you to question your own doubts, push you to serve something bigger than yourself, and encourage you to cling to a Hope Unseen.

AHA: Awakening. Honesty. Action: The God Moment That Changes Everything

Imagine Heaven: Near-Death Experiences, God's Promises, and the Exhilarating Future That Awaits You

Standing in the Fire