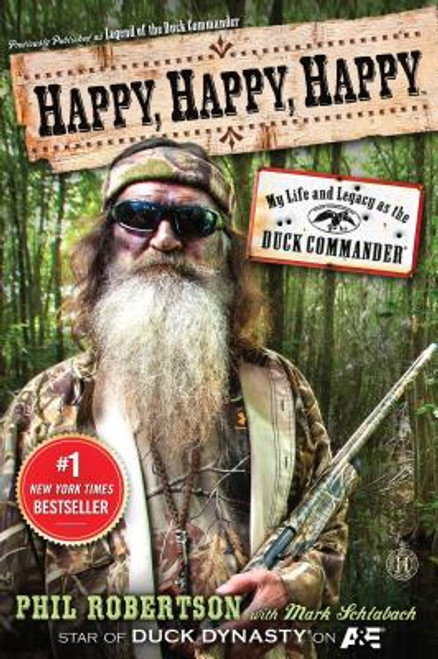 From the TV smash hit Duck Dynasty(R) comes a no-holds-barred autobiography of Phil Robertson and the three things that matter most to him: Faith, family, and ducks.

It isn't often that a person can live a dream, but Phil Robertson--better known as the Duck Commander--has proven that it is possible with vision, hard work, helping hands, and an unshakable faith in the Almighty. Phil's is the remarkable story of one man who followed his faith in God and soon after invented a duck call that would begin an incredible journey to the life he had always dreamed of for himself and his family. In the love of his country, his family, and his maker, Phil has finally found the ingredients to the good life he always wanted.

In Happy, Happy, Happy, you'll go beyond the scenes of Duck Dynasty and learn about Phil's colorful past and the wild road to the blessed life he leads today. Before, Phil's passion for the outdoors led him down some shady paths, and as a young proprietor of a rough bar, he says, he lived a life of "romping, stomping, and ripping." But through it all, Phil felt he was a "called" man--called to live off the land, called to leave a career in football for duck hunting, called to create a new kind of duck call, and finally, called to follow God and lead a life of faith.

In this eye-opening book, you'll feel like you're sitting face-to-face with Phil as he tells his story, and you'll see that his enthusiasm for duck hunting and the Lord is no act--it is truly who he is.

Discovering the Secrets of a Happy Marriage

Forgive: Why Should I and How Can I?

Raising Disciples: How to Make Faith Matter for Our Kids