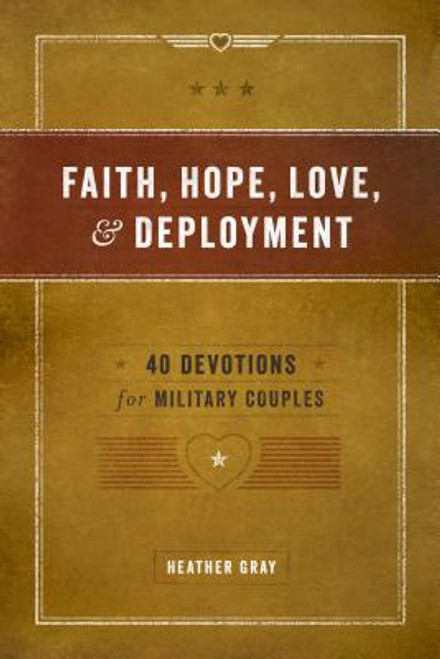 Just as Heather Gray and her deployed husband realized, many military couples need more than their own imaginations to keep their marriages flourishing during deployments. This is their answer to that dilemma. During her husband David's last deployment to Afghanistan, Heather and he realized the need for a devotional that would not only draw them closer to the Lord, but also to each other while separated. They envisioned a combination of scripture memorization, stories of hope and struggles, a revitalization of the lost art of letter writing, and practical ideas for keeping connected during deployment. Not finding such a book, they began writing Faith, Hope, Love, & Deployment. Sadly, three months after beginning the project, David was killed in action."To answer the question of why I'm willing to lay my life on the line for my country. . . ." So began the letter Heather received from her husband on the day of his funeral. The letter was an assignment from Faith, Hope, Love, & Deployment. She knew then the value of the devotional they had been writing for military couples. At first Heather didn't think she could finish it without his input and support. But in the months that followed, she realized that we actually learn and grow the most through our pain and trials. She finished the devotional with the hope it would be as much a blessing for other military couples as it was for her and David.

The Best Year of Your Marriage

That the World May Know

That the World May Know #16: Cultures in Conflict Guide