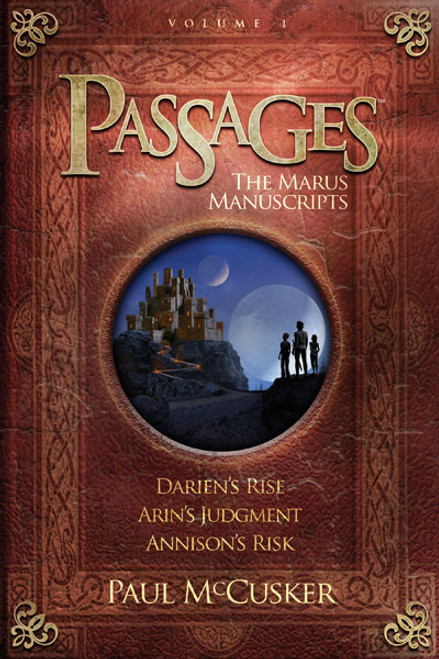 Now you can collect books 1-3 in the Passages series in one volume. Arin's Judgment: One minute, Wade Mullins is at home, attempting to destroy top-secret drawings for the atomic bomb. The next minute, he's in an alternate world staring at a strange prophet who says Wade is the final sign, an end-time omen of a culture on the verge of annihilation. Darien's Rise: Anna wanted superpowers, but now she's not so sure after being transported to a new planet. She sees visions of the future and her brother Kyle is a bodyguard who can't fail. But both of their powers are only used to help Darien, the rightful heir to the throne of Marus. Darien is being held by a man so evil, not even Anna and Kyle can save him. Annison's Risk: Maddy finds herself in a strange new land called Marus where a conquering king is about to marry a princess. The king's most trusted advisor is hatching an evil plot to stamp out followers of the "old faith," and Maddy discovers that plan includes the new princess. Should Maddy reveal the truth and usher in political chaos? Or will the princess have to give up her life to bring peace?