Ten Boys Who Used Their Talents 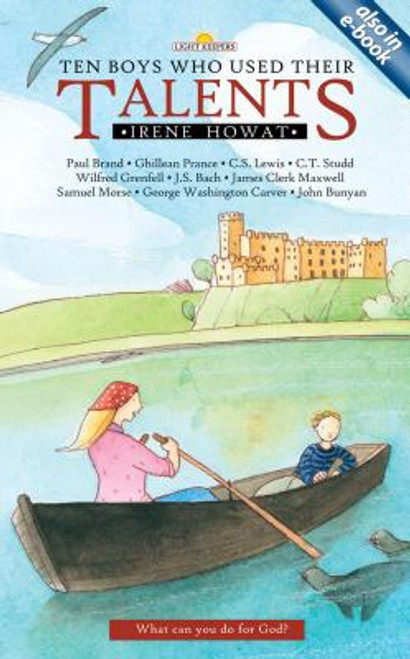 Ten Boys Who Used Their Talents

Lightkeepers; The internationally best-selling series from an award-winning biographer J's Bach; Paul Brand; John Bunyan; James Clerk Maxwell; Wilfred Grenfell; C.S. Lewis; Samuel Morse; Ghillean Prance; C.T. Studd; George Washington-Carver; What can you do for God? These ten boys grew up to become successful men. The two things they have in common is that they all put to good use the talents and gifts they had, and they all believed that God had given them to be used. Paul Brand took medicine into new lands to bring hope to the sick, Ghillean Prance's love of the world around him led to Kew Gardens, still a centre of excellence in studying God's creation, C's Lewis opened the door into Narnia and opened the hearts of many to new faith; C T Studd excelled on the cricket and the mission field; Wilfred Grenfell was an energetic explorer of the Arctic; J's Bach's music still inspires millions, as Christ inspired him; James Clerk Maxwell's faith in God's ordering of the universe led to key discoveries in science; Samuel Morse patented many inventions one of which has saved many lives; George Washington governed a country as he followed the Lord; John Bunyan was imprisoned to shut him up yet wrote a classic that still speaks today.

Ten Boys Who Changed the World

Ten Boys Who Made a Difference

Ten Boys Who Changed the World

Cold-Case Christianity for Kids: Investigate Jesus with a Real Detective

Finding the Hero in Your Husband, Revisited: Embracing Your Power in Marriage