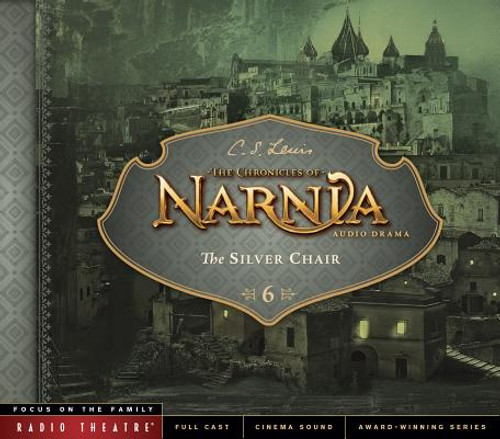 A missing prince . . . a mysterious Green Lady . . . an underground world of gnomes and giants . . . and an enchantment that must be broken by three unlikely companions. This is a journey into the depths of Narnia--where magic, darkness, and deception await at every turn.

As The Silver Chair begins, Eustace and his schoolmate Jill are running away from bullies at school, when they unexpectedly find themselves in the enchanted land of Narnia and in the very presence of the great lion Aslan. Soon they join their strange but courageous friend Puddleglum on a dangerous quest to find and rescue the heir to Narnia's throne.

Fully dramatized and produced with cinema-quality sound design and music, The Silver Chair is the sixth of seven audio dramas in the Focus on the Family Radio Theatre production of The Chronicles of Narnia. Hosted by Douglas Gresham, stepson of C. S. Lewis, and recorded in London, these timeless adventures are brought to life by a cast of talented actors, including award winners Paul Scofield, David Suchet, and Ron Moody.

This is a repackaged, individual title from the bestselling Radio Theatre resource The Chronicles of Narnia, which has sold more than 950,000 copies.

Radio Theatre: The Horse and His Boy