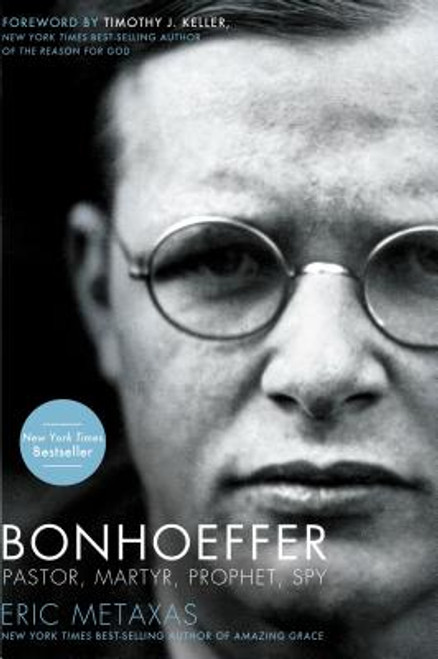 The reception of Eric Metaxas' Bonhoeffer: Pastor, Martyr, Prophet, and Spy met with unparalleled, resounding, and unexpected success among the Christian community and beyond in 2010. Yet, the book has caused a great deal of controversy among scholars, academics, and others who follow Bonhoeffer closely. This was not unexpected as Bonhoeffer was specifically intended to be a critique of those who understood Bonhoeffer to be "liberal" in his theological leaning as both evangelical scholars and non-evangelical scholars argued he was. Metaxas' book challenges this assumption by telling Bonhoeffer's story so as to demonstrate his theological orthodoxy. This fact, which undergirds so much of what Metaxas is trying to accomplish--namely--reclaim Bonhoeffer, has proved controversial in many people's minds. It is well known that Bonhoeffer is the first comprehensive biography of Bonhoeffer since the German theologian's brother-in-law, Eberhard Bethge, released his massive 1000pp+ biography in the early 1970's. Since that time however, much new information has come to light, and Bonhoeffer's story has been in desperate need of updating. It is Bethge's work, along with the new material Metaxas has synthesized that provided the groundwork for Bonhoeffer. The result has been widely acknowledged to be a masterful story complimented by lucid and inviting prose, historical accuracy, and deeply moving-emotional narrative which invites reader's into the world and life of Dietrich Bonhoeffer. Adolf Hitler and the Nazi's seduced a nation, bullied a continent, and attempted to conquer the world while exterminating European Jews secretly. While espionage and intrigue were the rule of the day, and while many groups discussed assassination, only one real organized attempt was made by German nationalists to rid the world of Adolf Hitler, and Dietrich Bonhoeffer was a key contributor. But how did Bonhoeffer, a Christian pastor and brilliant theologian come to the point of murder and step into what Metaxas understands to be the roles of "prophet" and "spy"? Metaxas' book is the fullest accounting of that transition, that struggle, produced for a broad readership. He tells the stories of Bonhoeffer's heart-wrenching 1939 decision to leave the safety of America for Hitler's Germany, of Bonhoeffer's from theological resistance to political action in Germany, of his key theological relationships with George Bell, Karl Barth and others, of his tragic romance with Maria von Wedermeyer, and of his imprisonment and subsequent martyrdom. Finally, Bonhoeffer gives witness to the extraordinary faith of an incredible human being, while also illuminating the tortured fate of a nation he sought to deliver from the evil tyranny of National Socialism, and its political party, the Nazi party. The reader will come face to face with a man determined to do the will of God radically, courageously, and even to the point of death. They may even find themselves asking: would my own faith provide me this kind of courage?

On Being a Pastor

Between Heaven & the Real World

Seven Men: And the Secret of Their Greatness (Softcover)